In his latest outburst, the Philippine president warned that he would wage a “revolutionary war” — which could include the suspension of constitutional rights — fuming with exasperation at his critics while confronting the heaping problems of the country. The Palace, in its spin, rejected this was a threat to the public.

However, this is not the first instance Duterte floated that idea. In 2017, he said he would set up a “revolutionary government” and declare all state posts vacant if political opponents try to plot destabilization against him. But these repetitive remarks are contradictory to his mandate as head of state. To declare “revolution” and “war” is to go against the state he represents.

Meanwhile, the government has ramped up its campaign to malign human rights defenders, militant people’s organizations and alliances since December 2018 when the National Task Force to End Local Communist Armed Conflict (NTF) was created. 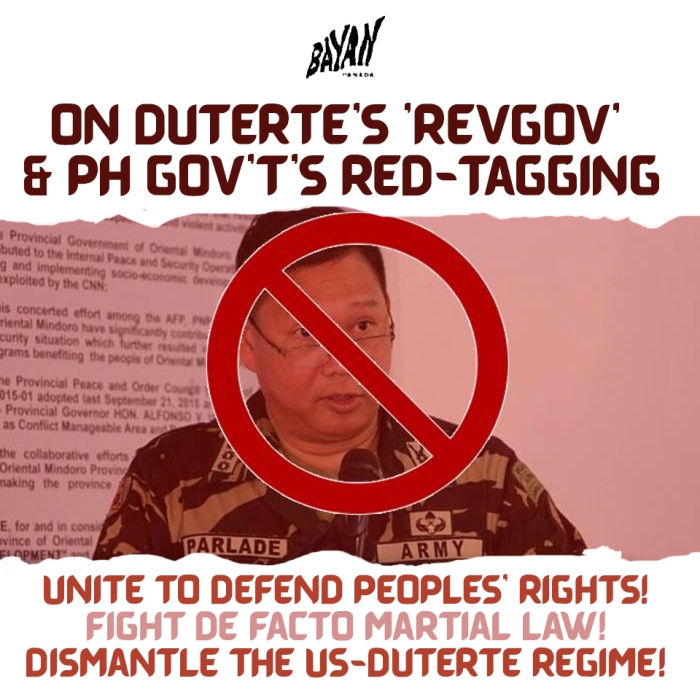 Antonio Parlade Jr, among the members of a Philippine delegation who brought their circus to Europe, has discussed in various fora the security threat of alleged “fronts” of the Communist Party of the Philippines-New People’s Army (CPP-NPA).

Among the falsely accused organizations are Ibon, Karapatan, Gabriela, Kilusang Mayo Uno, International League of Peoples Struggles and BAYAN. Their EU hosts were supposedly “surprised” to hear they were funding “terrorists” while they are highly-regarded groups with known well intentions.

But such unsupported exposition is just an echo of previous braggadocio from the Brigadier General. In 2011, then Armed Forces of the Philippines (AFP) spokesman Parlade, was dismissed by former President Benigno Aquino III from his post when he expressed his warmongering personal stance against the Moro insurgents in 2011. However, the election of President Rodrigo Duterte in 2016 promised a new beginning for the official, whose dismissal had a demoralizing impact on the rank and file. Duterte concentrated on the anti-drug campaign and reforming tax collection. He justified the centralization of political and military objectives of the government. He appointed Parlade to head the civil-military operations (CMOs) to attain popular support and discredit communist revolutionaries through a smear campaign.

With losses in raids and ambuscades through tactical movements by the revolutionary forces, the mercenary AFP resorts to the unconventional psy-ops warfare approach taken from the US Army manual straight from Ft. Leavenworth, Texas.

The military man as architect of the public (dis)information drive has then pushed for such modus operandi from a cooked-up narco list and fantasy rebel surrenderees to the ‘Red October’ hype and the imaginary ‘communist infiltration’ of universities to the latest lies the paranoid Parlade is insinuating. The aim is obvious: to empower the military establishment and to exercise martial rule without an official proclamation, undermining the people’s democratic rights and consolidating power under a fascist dictatorship, albeit desperately.

This scheme is bound to fail as our growing movement will prevail. The people’s revolution is not to be cowed by any warmonger, saboteur or any militarist state terrorist.

BAYAN commits to marshal the broadest strength of peoples in Canada to fight fascism and to advance the dignified cause of freedom, democracy, and a just and lasting peace in the Philippines.

Lastly, BAYAN-Canada supports all recourse and any action, Canada-based and international, to demand the Duterte administration’s accountability for these attacks.

BAYAN Canada, an overseas chapter of Bagong Alyansang Makabayan (New Patriotic Alliance), is an alliance of organizations of Filipino migrant workers, women and youth, indigenous people, church people, healthcare workers and professionals committed to advancing the cause of genuine national independence, people’s democracy and a just and lasting peace in the Philippines.