Skip to content
Every year, the President of the Philippines fails to address the worsening conditions and the people’s needs. When they fail to acknowledge the calls of the people, we will speak up.
Rodrigo Duterte’s 5th State of the Nation Address (SONA) will be held on July 27. This will take place in the midst of the COVID-19 pandemic, the worst economic crisis in history, and the fascist repression of the people under a de-facto martial rule. In the face of the unparalleled severity of this crisis, let us mobilize the largest and broadest front for the day of the SONA. Let us make this a Day of Reckoning, a Day of Judgement against the US-Duterte regime.
SONA ng Bayan, or People’s SONA, is part of a coordinated campaign organized by BAYAN Canada with activities happening across Canada. We will feature speakers representing different sectors overseas, as well as solidarity speakers.
Join the ND movement! Junk U.S.-Duterte’s Terror Law! Oust Duterte! 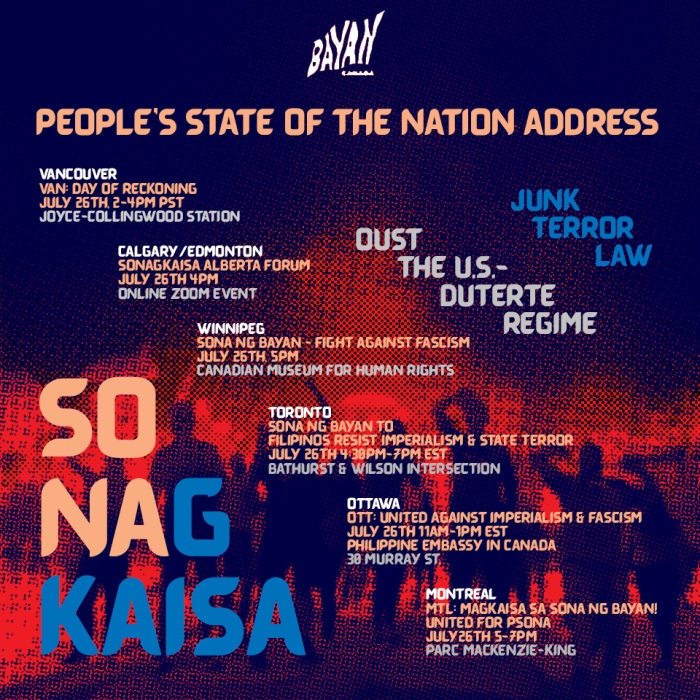 Can’t make it to the rally? We’ve got some online actions for you!
1. Join the livestream of the local rally.
2. Selfie protest! 📸
Take a picture with signs that say “Oust Duterte!”, “People’s SONA 2020”, or “Junk Terror Law!” and use the following hashtags: #OustDuterte, #JunkTerrorLaw, #StopTheKillingsPH, #ActivismNotTerrorism and tag us
3. Email zaps! 📩
Email your MP, MPPs, and Malacañang to take federal actions against state terror in the Philippines. Find contacts and email templates at tinyurl.com/psona-zap
4. Use #OustDuterte and #JunkTerrorLaw to speak out online.